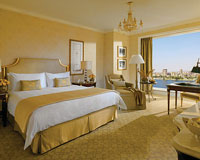 Stay in the heart of Cairo, with views of the Great Pyramids to enchant you and ancient zoological and botanical gardens just outside your door. At our luxury Cairo hotel, enjoy authentic fine dining and opulent meeting spaces. In nearby Giza, take in the best of the city's arts, culture and shopping. 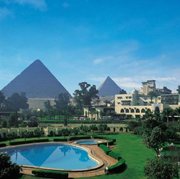 The origin of the Mena House was that of a royal lodge for the Khedive Ismail, used as a rest house for himself and his guest when hunting in the desert or visiting the Pyramids at Giza.

The main dinning room of today was once the entire lodge, but in 1869, with the opening of the Suez Canal, the lodge was enlarged. Also, a road was built between Cairo and the Pyramids (specifically for the visit of the Empress Eugenie) which made visits to Giza much easier.

In 1883 it was sold to Frederick Head as a private residence. The Heads, a wealthy English couple, lived an idyllic life at their new residence, enlarging their home and adding a second floor. Seeking a name for their estate, Professor A.H. Saya made the suggestion that it should be called Mena House, after the first king referenced in the Tablet of Abydos.

1885 Another hugely wealthy English couple, the Locke-Kings purchased the house from Mrs. Head, and it was they who set about turning the estate into a luxurious hotel.

1887 Mena House hotel received its first guest. With plenty of money to work with and an estate already rich with furnishings and other treasures left by the Khedive and the Heads, the Locke-Kings enlarged the building once again, adding the English touch of great fireplaces that were unusual in Egypt. However, they retained much of the Arabic ambiance of the facility, and enhanced this with fine Mashrabia (wooden screens) work, fine blue tiles, mosaics and medieval brass-embossed and carved wood doors. Their taste was excellent, and the hotel has been kept with such good care, that many of these original fixtures are still in use. 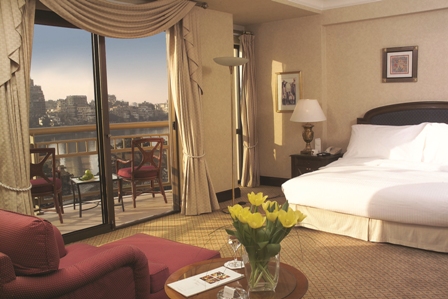 On the banks of the Nile river, the city of Cairo is the center of Egyptian culture and commerce. For the finest in event venues in this majestic city, look no further than the gracious hospitality of Fairmont Nile City, Cairo, part of the prestigious Nile City complex with 9,900 square feet of dedicated meeting and convection space, the hotel also offers sweeping panoramas of the Nile river with Pyramids in the distance. With city finest restaurants, a unique rooftop pool and bar, and a full service willow stream spa.

Nabila Tours & Cruises specializes in tours to the Middle East and Eastern Mediterranean; such as Egypt, Turkey, Israel, Jordan, Greece,..... etc. We offer private and shared tours to accommodate every client's need.

We have been providing our clients with phenomenal vacations for the past 37 years.

Our friendly and experienced staff ensures a smooth, relaxing and memorable travel experience that you will remember for a lifetime.
Read More